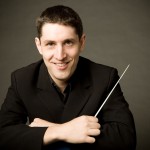 Andrew Griffiths enjoys an enviable reputation as a dynamic and versatile young conductor with a particular flair for opera and choral music.

He has conducted productions for The Royal Opera, Welsh National Opera, Opera North, Opera Theatre Company, Early Opera Company, Mid Wales Opera, Bampton Classical Opera and Iford Festival Opera. In concert he has appeared in concert with the Orchestra of the Swan, Southbank Sinfonia and Orpheus Sinfonia, and is regularly engaged to broadcast and record with the BBC Singers.

Andrew has worked at Glyndebourne, ENO, Scottish Opera, Chicago Opera Theatre, Opera Collective Ireland, and with the BBC Symphony and Scottish Symphony Orchestras, as well as on numerous Royal Opera productions (including the Ring and the world première of The Minotaur), under such conductors as Pappano, Bychkov, Elder, Gardiner and Mackerras. He is often engaged for projects outside the standard operatic canon, and is particularly experienced in Baroque repertoire and the music of the last 50 years. Much sought-after as a vocal coach, he works frequently with the singers at the National Opera Studio and The Royal Opera.

In constant demand as a choral conductor, Andrew’s engagements with the BBC Singers have included the world première of John Pickard’s Mass in troubled times, recordings of 20th century American repertoire, and broadcasts of the Howells, Parry and MacMillan. He regularly directs the choirs at Dartington International Summer School, and has appeared in concert with the BBC Symphony Chorus, New London Chamber Choir, and Hong Kong’s Tallis Vocalis. He is Musical Director of Kingston Choral Society and chamber choir Londinium, whose debut recording, The Gluepot Connection, was recently released to widespread critical acclaim.

A pianist, viola player and singer by training, Andrew began his musical education as a Quirister and Scholar at Winchester College, and read music at Gonville and Caius College, Cambridge, where he held a Choral Exhibition. He studied conducting under Martyn Brabbins in Glasgow, and trained as a répétiteur at the National Opera Studio and at Scottish Opera. He is a former principal viola of the National Youth Orchestra of Great Britain, and a founder member of vocal consort Stile Antico. In 2008 he was chosen to receive the Wagner Society’s Bayreuth Bursary.

Andrew will shortly make his debuts with the Royal Ballet (conducting Sidi Larbi Cherkaoui’s new work) and the Royal Northern Sinfonia (Bach’s B Minor Mass). Other forthcoming engagements include Mozart, Beethoven and Thea Musgrave with Orchestra of the Swan, and a Venetian Vespers for the Ascension at Dartington.

Gavin Roberts enjoys a varied career as a piano accompanist. He has partnered singers in recital at Wigmore Hall, the Barbican Hall and the Royal Festival Hall, and is Artistic Director of the recital series Song in the City. He has appeared at The Cheltenham Festival, Dartington International Festival, The Ludlow Weekend of English Song, The Ryedale Festival and The Oxford Lieder Festival. He works regularly with soprano Lucy Hall, with whom he was the winner of the Oxford Lieder Young Artist Platform, and actor Rosamund Shelley, with whom he performs her one-woman shows Novello & Son and War Songs.

He has played for The BBC Singers, The Joyful Company of Singers, Constanza Chorus, The Hanover Band, Tiffin Boys’ Choir, and as a répétiteur for Sir Roger Norrington and the late Richard Hickox. Gavin has appeared regularly on BBC Radio broadcasts as a soloist and accompanist, often giving première performances of new works. He has played on numerous recordings for the BBC, ASV, Guild and Priory Records. His most recent project is a CD recording of London-themed song commissions for Song in the City.

Gavin studied piano with Andrew West and Eugene Asti at the Guildhall School of Music & Drama, where he is now a professor. He previously read Music at Gonville and Caius College, Cambridge, where he also held the organ scholarship. Following this, Gavin gained a Master’s degree from King’s College, London. Gavin is Organist and Director of Music at St Marylebone Parish Church.